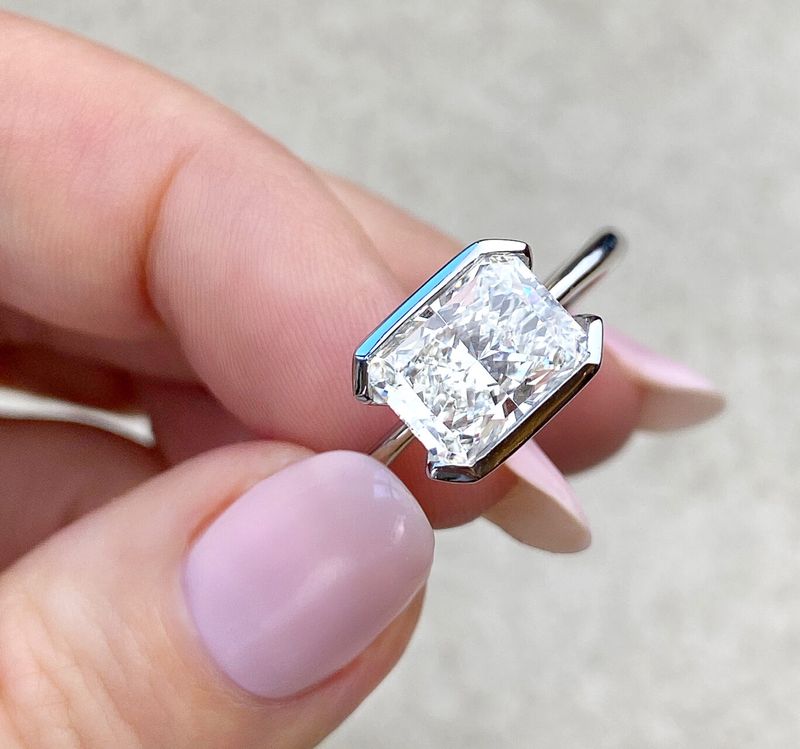 School House Rock, Star Wars, Saturday Night Fever…and yes, the radiant cut diamond. The late 70s were full of awesomeness, and this unique diamond cut is no exception. Invented in 1977, the radiant diamond was the first rectangular diamond cut to feature brilliant facets, a whopping 70 of them, in fact (for reference, today’s round brilliant only has 58). Like the kitchen sink of diamonds, radiants are a hybrid cut that crosses those brilliant facets with the step-cut outline of an Asscher or Emerald. Radiants might seem like you’re getting the best of both worlds—but there are some downsides. If you’re into them, that’s groovy, just promise you’ll check out our cons list below before you commit to spending forever with one on your finger.

Is a Radiant Cut Pillow-y Soft?

One of the most frequent questions we get about radiants is how they’re different than cushion cut diamonds. And darling, they really are quite different. For starters, radiant cut diamonds have straight sides and straight, cut corners (like someone lopped the points off a rectangle). Cushions, on the other hand, are all soft and pillowy, with curves everywhere—rounded sides and rounded corners and oh, so romantic. Their faceting patterns are also distinct. The radiant cut has small, sharp facets, which are great for lots of sparkle, while the cushion cut has larger facets that are better known for their fiery rainbow flashes. Cushions are by FAR more popular, which means more setting options and more availability.

Radiant cuts also look eerily like a princess cut, which is a sharply pointed square diamond. Now, the princess cut, like the cushion, is way more popular than the radiant, but we’re not sure why…those big pointy corners snag on everything and tend to chip easily so…consider us confused.

Playing Hard To Get

Really, though. Radiants just aren’t that popular. They only make up about 2% of diamond sales. Which, yay for standing out. But the less popular a diamond cut is, the less folks will cut them—thus making them significantly harder to find. Want a really nice one? It’ll be even harder. Not that it can’t be done. You just kind of have to commit to the search.

Once you’ve entered the game, you’ll probably notice that radiant cuts seem mysteriously cheaper than all the other diamonds. And you won’t be wrong. They’re one of the most affordable cuts of diamond because the cutting process uses a larger percentage of the original diamond rough, so very little goes to waste. That means that per carat, they’re definitely more for your money. Which is good because…per carat, they’re also smaller for the money. See, radiants face up with a smaller visual size than all the other cuts of diamond—so if size matters to you, you’re probably going to want to go bigger than you originally thought.

And we’re not talking feelings. Radiant diamonds are cut pretty deep, holding a lot of weight in their pavilions (the bottom portion). This is to help those brilliant facets return light to your eye, really blinging it all out. But put that together with their shallow corners and you have way more visible body color than in other diamond shapes. Radiants’ lack of rough loss and depth of color are one of the reasons you’ll often see fancy colored diamonds and gemstones cut in this shape. But if you’re looking for something colorless, you shouldn’t go below the G-H range, which means spending a bit more on diamond color. Or set it in yellow gold to disguise some of the color!

The Many Facets of a Radiant Cut Diamond

Unlike the soft facets of a cushion or the hall of mirrors you’d get with an emerald cut, radiant cut diamond facets look like tiny shards of sharp glass. This is great for hiding inclusions (here’s where you can go a bit lower on clarity grade while keeping it eye-clean), but not so great for symmetricality. Did we make up a word, there? If your radiant diamond’s facets and keel line (the vertical middle of the diamond’s pavilion facets) and corners aren’t just so, it really makes the diamond look wonky.

Here’s where radiant cuts stand out from the pack. See, most diamond shapes have preferred length-to-width ratios, but not radiants. They come in square cut and rectangle to your heart’s content. Which means very little consistency and possibly having to settle for an imperfect ratio to match your other color, clarity, or carat weight expectations. What to know? If you want it to appear square, stick between a 1 and 1.05 LTW, and if you want rectangular, go above 1.15. Other than that, you just have to stick with what you like.

Just know that if you go long, you gotta watch out for the bow tie effect. Yep, radiants have that too! While not as common as ovals, pears, or marquises, elongated radiant cut diamonds can definitely rock a not-so-pleasing bow tie, or dark faceting pattern, horizontally through their middle. How to know? You have to see it. Make sure you get eyes on your radiant cut before you say you do.

Look, if all those reasons haven’t convinced you to steer clear of the radiant cut, then by all means, check out our diamond search where you can view 360-degree images of more than 10,000 diamonds and don’t forget to zoom out (because size can be deceiving), or book a virtual or offline appointment at our New York salon to view certified lab-grown and natural diamonds in person.