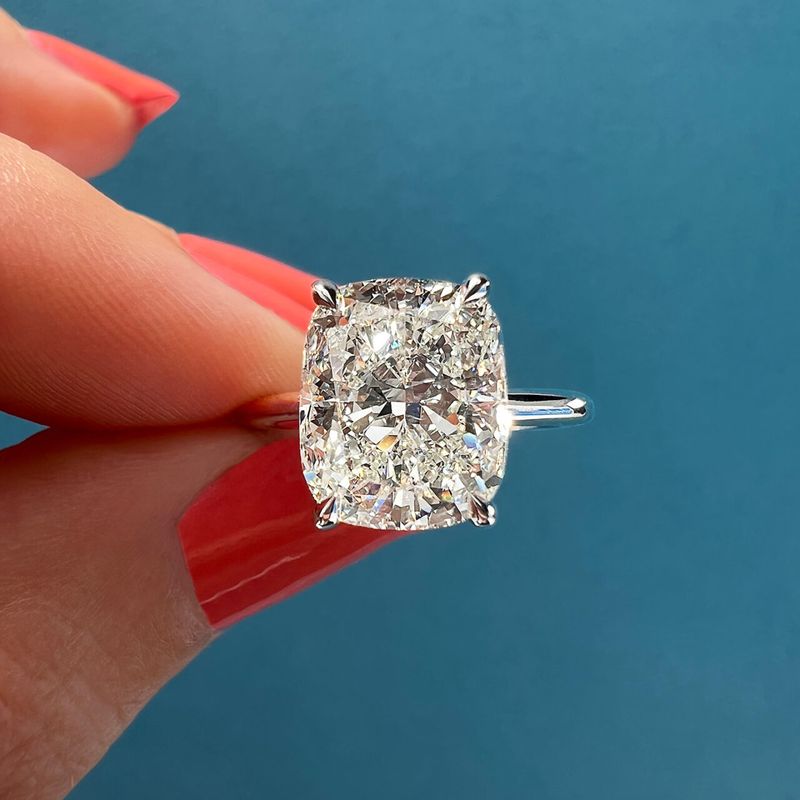 GIA Certification — What Makes It So Great?

Chances are, you’re reading this post because you’re super confused about diamond grading and diamond certification. Perhaps you’ve been scrolling endless internet feeds of natural and lab grown diamonds with grading reports from countless different labs. GIA. AGS. GCAL. IGI. EGL. So. Many. Acronyms. Are they the same? Are they different? Is one better than the rest? Darling, it’s not you. It’s us. Well, it’s the diamond industry, really. But we promise, we’re here to help you make sense of it all. Because at the end of the day, that GIA diamond grading report is definitely worth it and you want worth it when you’re dropping major dollars on a spectacular new diamond ring.

Cream of the Crop

Fact of the matter is, darling, that different retailers extoll the benefits of different grading labs for a variety of reasons, including that they’ve paid to have their stones certified by one and thus want to convince you it’s the best lab out there. It happens. But there’s no getting around the fact that the Gemological Institute of America (GIA) is, hands down, the gold standard in diamond grading.

Why? Well, every lab out there (or, at least any worth noting) is using the good ol’ 4Cs diamond grading system. But GIA invented the darn thing. Established in 1931, and continuously operated as a non-profit, GIA is considered the most consistent and objective independent diamond grading lab. That said, GIA certifications can sometimes fetch a slightly higher (about 10%) price tag than other lab-graded stones because of this great reputation that adds perceived value to the stone.

GIA certifications come in a few different flavors, so it’s good to know what you’re looking at (and every lab has slightly different names for their certificates). For natural diamonds, there is the Diamond Grading Report (DGR) that includes an assessment of the 4Cs – Color, Clarity, Cut, and Carat Weight – along with a plotted diagram of the diamond’s clarity characteristics and a graphic representation of its proportions. For standard round brilliant cut diamonds falling in the D-to-Z color range, the report also includes a GIA Cut grade. There is also what’s called the GIA Diamond Dossier® that can be issued for diamonds weighing 0.15 – 1.99 carats. This leaves out the full clarity plot, but will always include a microscopic laser inscription of the GIA report number for easy identification (a DGR can be issued without an inscription, but these days is more rare).

The GIA Laboratory-Grown Diamond Report includes all the same stuff, and will specify the type of lab-grown diamond as well as include a girdle inscription on the diamond that states “Laboratory-Grown” and its GIA report number. This is only issued as a digital report, not a printed one. While GIA began grading lab grown diamonds in 2007, it wasn’t until 2019 that they discontinued use of the “synthetic label” and began issuing color and clarity grades for lab grown stones that were on par with the specificity they apply to natural diamond grading.

GIA also issues certificates for natural colored diamonds, colored gemstones, and pearls. They test every material they examine to determine its nature and discloses any treatments found during examination. Given the tightly controlled and independent nature of GIA, any stone with a verified report from this lab can pretty much be considered good to go.

A relatively new player in the diamond grading game, GCAL (Gem Certification & Assurance Lab) was established in 2001 in NYC and offers a “money-back guarantee” on their grading certificates. Again, they offer several different versions of their certificates, but the most common is the Guaranteed Diamond Grading Certificate, which includes many of the same basic stone details as GIA, but no full clarity plot. Instead, GCAL offers Gemprint, an optical fingerprint of your diamond, along with actual photomicrograph images of the top (crown) and bottom (pavilion) of the stone.

In addition, and this is where GCAL’s specialty lies, their certificate provides an in-depth light performance profile that captures the brilliance and symmetry of each diamond, complete with visual representation. Their Guaranteed Express Grading Certificate, similar to GIA’s Diamond Dossier, is an abbreviated version that leaves out the light performance details. GCAL offers the same versions for lab grown stones, again, with the “lab grown” laser inscription on the diamond’s girdle. Overall rating? High. GCAL’s grading standards and consistency are on par with those of GIA, they’re just a bit newer to the game, and there are fewer stones out there with GCAL reports so far. Some retailers also offer the two in conjunction as a double-certification if you’re really into it.

The IGI, or International Gemological Institute, stakes their reputation on being the most global of the big-acronym labs, with 20 locations around the world. This creates accessibility and access to high quality, graded lab grown diamonds. IGI is less strict than some other institutions when it comes to color-grading natural diamonds, so we tend to lean on them for lab grading only!

The IGI Diamond Report does include a clarity plot but does not include proportional diagrams or light performance measurement. Where IGI has beaten others to the punch is in lab-grown diamond grading. Across the globe, IGI began actively grading lab-created diamonds ahead of the pack and thus you’re going to find more lab grown diamonds with full IGI certificates. The IGI Laboratory Grown Diamond Report provides the same information as the IGI Diamond Report along with, you guessed it, a “lab grown” inscription on the diamond’s girdle for clear identification.

Founded in 1934 by the same folks behind GIA, The American Gem Society (AGS) is revered for its proportion-based cut grading system. Along with GIA, AGS is one of the most reputable diamond grading labs out there, however their consistency on clarity grading is often considered a bit more iffy than GIA’s.

For lab grown diamonds, AGS recently began offering a Laboratory-Grown Diamond Grading Report. Like other labs, this includes adding a “laboratory grown” laser inscription to the diamond’s girdle. You may also note that color and clarity are listed with an “LG” in front of them to specify that these have been graded against a lab-grown standard. This report also does not include a full clarity plot of the diamond.

The European Gemological Laboratory, a member of the EGL USA Group, has been around since the late 70s, but due to organizational changes, suffers from a lot more inconsistency in their grading and report styles — including an up to two grade difference from more reputable labs. For obvious reasons, this isn’t ideal, and in general we don’t recommend certificates from EGL.

It should be noted that, in general, lab grown diamonds have only recently started to receive reputable diamond grades, which means that more inconsistencies may happen and fewer certificates may exist. You can always, however, request that a stone be sent to the lab for a certificate if it doesn’t yet have one, for a fee of course. Any reputable jeweler should happily oblige, but keep in mind that if you’re shopping for more unique things like antique cuts, rose cuts, or salt-and-pepper diamonds, certificates are less the norm, so don’t be too surprised to not find one.

If you’re ready to jump in, explore our diamond search where you can view 360-degree images of more than 10,000 diamonds, along with their grading certificates. You can even filter by your preferred lab! Just don’t forget to zoom out (because size can be deceiving). If you need a helping hand, email us with what you’re looking for at hello@frankdarling.com. We’ll curate a list of 5-7 exclusive stones that are just right for you. Or book a virtual or offline appointment at our New York studio to view certified lab-grown and natural diamonds in person.