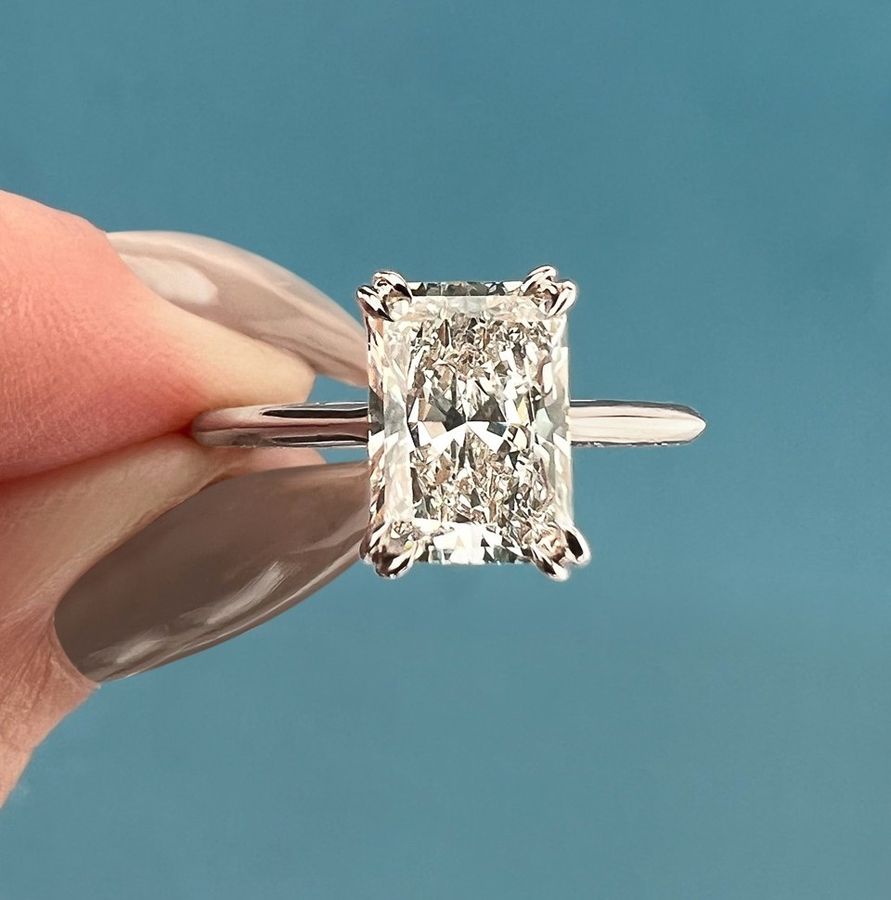 Battle of the Diamond Shapes: Elongated Cushion vs. Radiant

We know, we know, choosing a diamond shape is hard enough as it is, but when given the choice between an elongated cushion cut diamond and a radiant cut diamond, it’s like really, really hard. At first glance, one might not be able to tell the difference between these two stunners — what with their bounty of sparkle and finger coverage — but upon closer inspection they’re actually two of the most unique diamond cuts available. So don’t throw in the towel just yet. Let’s get to the blow by blow review to see which diamond shape comes out on top.

Ok, let’s knock this one out and talk about just how different these shapes truly are. First of all, the cushion cut is all soft curves and rounded corners. It’s a cut that has been around for a couple hundred years, evolving directly from old mine cuts back in the 19th century, and no two are ever exactly alike. Cushions, especially the more antique-y cut ones, tend to have slightly smaller tables and larger facets, giving them a very pillowy look (hence the name) and romantic softness.

Radiant cut diamonds, on the other hand, are all sharp angles and geometry. Invented in the late 1970s, the radiant cut diamond is a cross-section of everything and at its heart what we like to call a ‘mixed cut’ meaning it’s made up of different faceting styles. For instance, it has the radiating brilliant facets but the overall shape of a step-cut emerald with straight sides and slanted, cropped corners (instead of sharp points like a princess cut).

The winner? Well, we’ll let you be the tie-breaker on this one because it really comes down to personal preference. If you like an edgier, super sophisticated look then a radiant might be for you. But if you prefer a bit of vintage feel, or like something a bit softer, then swing for a cushion.

Round Two: Length to Width Ratios

When it comes to cushion cuts, though, you’ll find that a majority of the marketplace is made up of cushion cut diamonds with ratios between 1:1 – 1:1.05. Which, obviously, isn’t a major difference. Why is this? Well, a few reasons. First of all, cushion cuts are often used as a more affordable alternative to the super popular round brilliant cut diamond. And think about it, a very square diamond with rounded sides and rounded corners… well it can easily be mistaken for a round stone.

But if we’re talking about elongated cushion cuts (we are) then you’re going to want to look into something above, say, 1:1.15, often up to 1:1.30 or higher if you want something that’s super stretched. The pros of this? They definitely won’t get mistaken for a round diamond. The cons? There aren’t a whole lot of setting options in the pre-made department. If you’re looking at an elongated cushion cut, you’re likely looking at custom. Which is also our thing around here, so don’t let that scare you. In fact, our Diamond Concierge service is here to help you source the perfect diamond for you in any shape you like!

Similarly, radiant cut diamonds can have a 1:1 ratio, which will look like a square with cut corners, or more elongated like a rectangle with cut corners. There are more elongated radiants on the market and they do tend to have more setting options because they fit into most emerald-cut diamond settings that have the same outline. The winner? Well, we’re giving length to width to the radiants simply because when talking about the availability and flexibility of elongated stones, you’re gonna have more options.

When it comes to that bling bling (which we know is everyone’s thing), cushion cut diamonds have two different facet arrangements to be aware of. There’s the standard cushion brilliant and then what we call the cushion modified brilliant cut, and the visual difference between them can be surprisingly dramatic.

The cushion brilliant has a pattern quite similar to the standard round brilliant cut, with pavilion facets that extend from the point at the bottom (the culet) all the way to the outer girdle edge. Cushion modified brilliants are a variation on this with an added row of facets between the pavilion facets and the girdle. This modified cut is what’s we call in tbe biz a “crushed ice” cushion. It’s very sparkly and, in fact, more similar to the brilliance of a radiant cut diamond than a round brilliant.

On that note, a radiant cut diamond is made up of gobs of thin, sliver-like facets that give it an intense, almost shattered look that throws sparkle every which way your eye can see. The biggest difference between a cushion and a radiant when it comes to sparkle is that radiants are really cut to maximize intense sparkle while cushions, in general, tend to have softer rainbow flash instead. So, we’re giving this one to radiants too.

Both cushion cut and radiant cut diamonds have deeper pavilions than many other shapes, which allows their brilliant bottom facets to really reflect light. Problem is: deeper stones with more weight in the pavilion also tend to show more of their body color. Which is great if you like a warmer-toned or colored diamond and also why you see many colored diamonds and other gemstones in these shapes (because then the point is to show off the color). But not so great if you’re looking for something super colorless.

We’re calling it a tie here and just want you to know that if you want white metal and a colorless stone, we’d suggest not going any lower than an H color grade in either shape. If you like yellow gold or a warmer stone tho, then slide on down that scale and save yourself some cash!

Finding an eye-clean cushion cut diamond isn’t too hard. But this goes back to the question of whether you prefer a standard or modified “crushed ice” brilliant cut cushion. Whereas the modified cut helps disguise some inclusions with its extra row of facets, the chunkier pattern of a standard cushion brilliant won’t do the same. If you’re going that route, try to avoid stones with inclusions under the table, especially, and maybe pay out for a slightly higher grade. But if you have a stone with smaller, more broken up facets, you can easily find something eye clean in the SI range.

Radiant cut diamonds, perhaps you’ve already guessed, are great at hiding inclusions. It’s all those tiny facets, darling. And you can definitely find eye-clean radiant cut diamonds in the SI clarity grades, no problem. Radiants for the win.

Cushion cut diamonds, while less popular than the round, are still pretty popular (and have been for years) so they won’t save you as much cash as other fancy shapes. But a crushed ice cushion cut will usually be a bit less expensive than a comparable standard cushion brilliant cut, if you’re looking at ways to cut the budget. Now, elongated cushion cuts, on the other hand, might run a bit more expensive simply because they’re more rare, but it’s not a drastic difference when comparing side by side. Radiant cut diamonds will actually run pretty similar in price to cushion cuts with comparable weights and qualities. So this one’s a tie.

Well, in the battle of elongated cushions to radiant cuts, radiants came out with the slightest of edge, mostly for the fact that they’re just more available and have guaranteed sparkle. But when it really comes down to it, these are two very different shapes that should be appreciated for their own unique qualities.

To explore what they really look like (yes, with your own two eyes), check out our diamond search where you can view 360-degree images of more than 10,000 diamonds and don’t forget to zoom out (because size can be deceiving), or book a virtual or offline appointment at our New York salon to view certified lab-grown and natural diamonds in person.