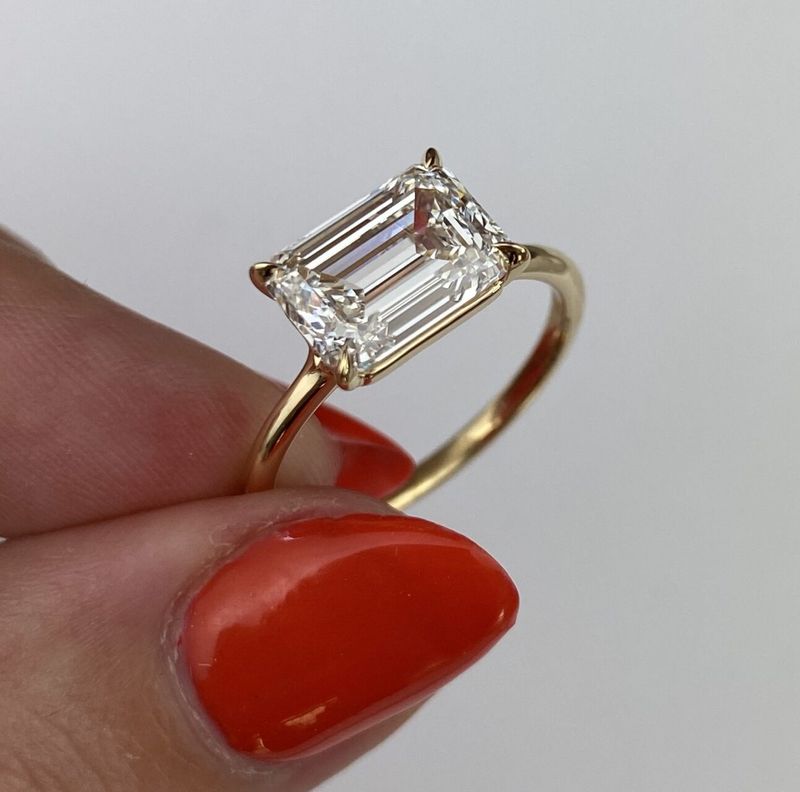 Charles and Colvard: Worth the Moissanite Upcharge?

So, you’re interested in a moissanite engagement ring. But you’re not sure if, say, one manufacturer, cutter, or retailer is better than another. You’ve probably heard the name Charles and Colvard thrown around, and that’s no surprise, given they’re basically the OG of this stunning gemstone. But then there’s the brand names. Like, Forever One, Charles and Colvard’s signature stone, and the Harro Gem, another spectacular moissanite we source for our lovebirds. But what sets these stones apart, what should you look for, and what should you hand over your plastic for? You’re about to find out.

But it is still science. Moissanite, despite being a totally natural gemstone, just doesn’t occur in enough quantity in nature to make it onto your fingers. So it’s made in a lab. Moissanite is silicon carbide. It is nearly as hard as diamond, 100% suitable for everyday wear, and is in fact more sparkly than diamond! While it’s often used as a standin for diamonds, it’s becoming sought after for its own characteristics, and its much lower price tag.

Charlie and the Moissanite Factory

The first company to produce and sell lab created moissanite, Charles and Colvard have spent 25 years perfecting their product. They also owned a patent on this pretty rock until 2015, but now the market has opened up and you’ll find more and more players at the moissanite table. Similar to the diamond industry, where every retailer seems to have their own branded cut of diamond advertised as more brilliant than all the rest…the moissanite industry is full of options. So how’s a darling to decide? Same way you would a diamond, my dear!

Speaking of sparkly, moissanite does it better. How so? A little quality called refractive index. Very nerdy. Very need to know basis. In layfolk terms, it’s a measure of how much or how little a material (in our case, gemstones) bends and returns light. Diamond has a 2.42 RI. Moissanite has a 2.65! Higher! Yes! In visuals, moissanite gives you more rainbow fire, whereas diamond is mostly white light with a few colorful flashes. Some people love this effect (it’s very pretty) and some just want a plain ol’ diamond. Wink, wink. Who are we to judge?

Now, here’s where it starts to get tricky, because everyone cuts moissanite differently. Charles and Colvard, for instance, cut their stones to emphasize the super sparkly, rainbow flashy nature of moissanite, celebrating it in all its glory. While other cutters, like Harro Gems, one of our faves, tend to cut moissanite to act more like diamond, with an icier, less rainbow-y appearance. While diamonds have simple cut grades to help you judge their brilliance, moissanite don’t use the same standards, so it’s best to determine which look you like and find the cutter who does that the best.

When it comes to color, early moissanite experiments definitely fell toward the lower end of the diamond color grade scale, think J-K-ish, and they often rocked a sort of greenish, grayish cast (whereas diamond tends to be more yellowish or brown). While you can still see this out there in the market, often listed as “classic moissanite”, manufacturers have come a long way. Charles and Colvard’s Forever One moissanite now comes in colorless (D-F) and near-colorless (G-I) options, and you’ll find the same from many other companies.

Clean as a Whistle

Clarity is a bit different with moissanite than diamond, as moissanite tends to be less included and is now being manufactured to be completely flawless. Harro Gems offers an exquisite VVS1-VVS2 range of moissanite while Charles and Colvard’s stones fall in the flawless-VS1 range. These are all going to be eye-clean, darlings, so don’t worry too much about specificity here. What you might see with moissanite, however, is a very slight haziness to its facets as it has a double refraction that can make the lines of the facet appear to be doubled. Any good moissanite cutter will know the proper direction to cut and set your stone so as to limit this appearance, but it’s good to know what you’re looking at.

Sizing Up the Wrong Tree

Ahhh, carat weight. This classic measure of diamond weight is interesting when talking about other stones. Why? Well, because every type of raw gem material—from diamond to moissanite to ruby to amethyst, et al—has a different weight, even though it might be cut to the same size. Like, a bucket of bricks will be heavier than the same bucket full of feathers, yeah? You got it. Moissanite is naturally lighter than diamond, so 1 carat of diamond will be smaller than moissanite. This is why you’ll often find moissanite listed with their millimeter measurements first, and a “diamond carat equivalent weight” second. Just don’t get confused when you see “carat” and think it’s a measure of a moissanite’s size. It’s not. Ever.

The Shape of Things

Shape is another area where moissanite cutters tend to diverge a bit. Many offer a pretty standard range of familiar diamond shapes to select from. Charles and Colvard does this, with a couple of fun extras thrown in, like the elongated oval and cushion, a rose cut, an old European, for instance. Where Harro Gems stands out is in their super wide selection of unique shapes, including crushed-ice cushions, antique cuts, half moons, and more. They will also custom cut any shape and size you desire. Want a crushed ice oval? Check. A perfectly square radiant? Done. Imagine a stone shape and they can create it in just a few weeks!

Want to see some moissanite for yourself? Explore our collection and don’t miss the 360 videos to see how they sparkle. Or start customizing your dream moissanite engagement ring with our design quiz and get a free sketch of your style. Need a little more understanding before you dive in? Drop us a line at hello@frankdarling.com and our team of jewelry experts will turn you into a gem geek in no time.