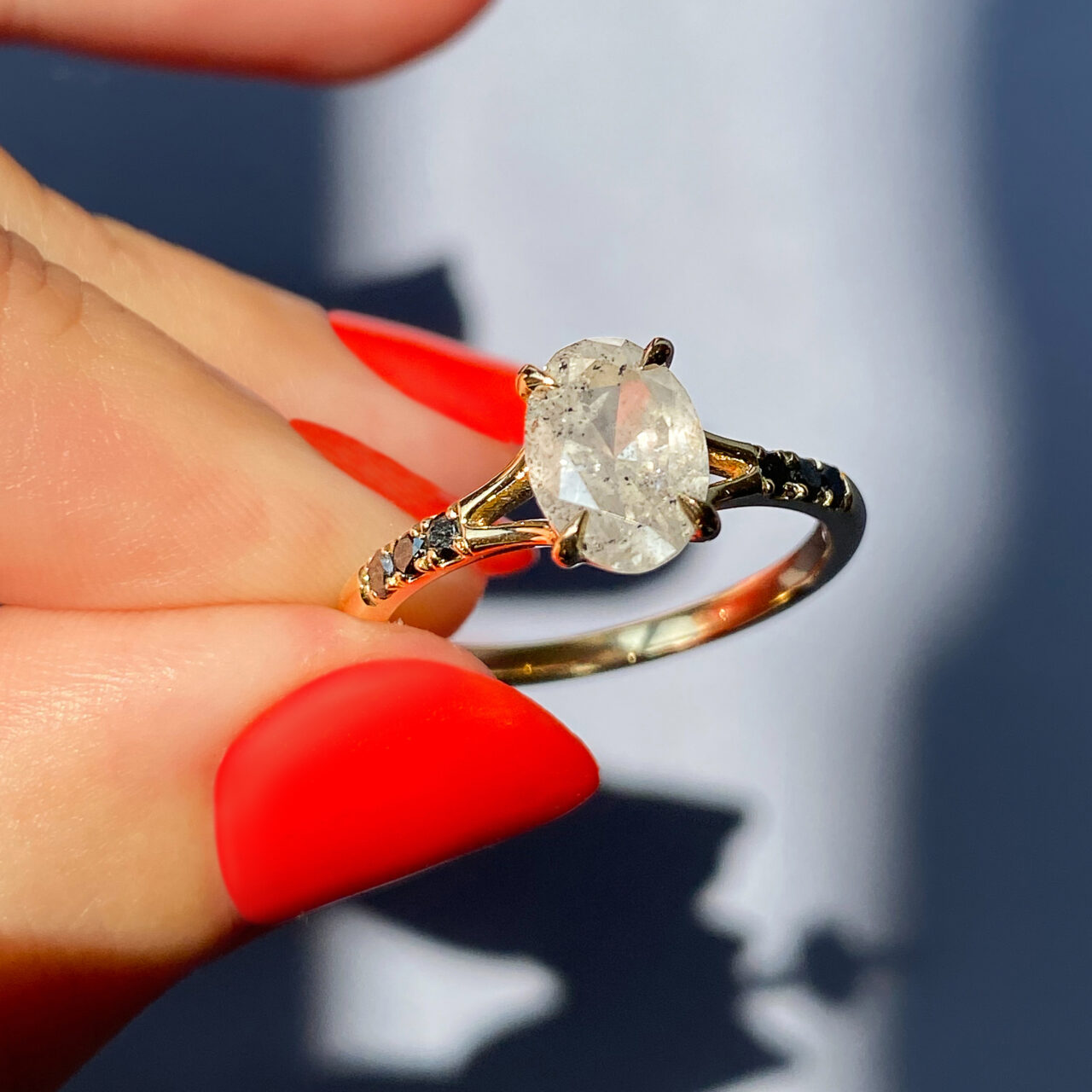 Cloudy Diamond? Here’s What May Be Happening

Think your diamond is looking a little cloudy today? Don’t worry, darling, most likely it’s nothing a bit of soap and water won’t cure. But we get how disconcerting the idea can be. After all, diamonds should be bright and clear and sparkly, right? While diamond clarity might be the first thing that comes to mind, there are other reasons your diamond might be looking a bit duller than usual. So here’s a little silver lining:

A Cloud of Suspicion

FIrst of all, let’s figure out what we’re dealing with here. Either you’re about to purchase a diamond and want to avoid cloudiness. Or you’ve already purchased one and it wasn’t cloudy when you bought it…but is today. Let’s deal with the first of these — avoiding purchasing a cloudy diamond.

Get a Little Cloudy Diamond Clarity

One of the best things about diamonds is that they don’t wear in the same way as semi-precious gems, which can get scratched up and start to appear dull with daily wear. Diamonds are super hard! So while you do have to use caution wearing them next to other diamonds, nothing else is going to scratch them. Phew. But on the other hand, diamonds do actually have some internal clarity characteristics that can cause them to appear cloudy. Like, say, clouds. Now, we’re not talking about salt and pepper diamonds here, which stake their name on visible inclusions.

What we’re talking about are certain inclusions that sneak under the radar because they’re not necessarily what a diamond grader would call obvious to the naked eye. Now, one of the easiest things to look for will be listed right on a diamond grading report and it goes a little something like this: clarity grade based on clouds not shown.

If you see this, we’re not saying run. We’re just saying there’s a higher chance of that diamond having widespread cloud inclusions that could potentially give a diamond a hazy overall look. When you see this listed on a grading report, it’s because plotting the clouds in the diamond would just be like coloring in the whole oval on a multiple choice test. Not cute. But remember that clouds are just clusters of miniscule pinpoint inclusions, like a soft mist, so even if it’s listed this way, it might not affect the diamond’s appearance. But yeah, it also might. To a lesser degree, twinning wisps and graining lines (all of which are totes natural to diamond growth) can have similar effects. The best thing to do in any of these cases is to get your eyes on that diamond or have a reputable jeweler examine it for you to make sure the stone isn’t visibly hazy.

Glow in the Dark

There’s one other way a diamond might appear cloudy, and that’s fluorescence — a term that’s surrounded by confusion but we’re here to clear things up. First of all, only about one third of diamonds have any fluorescence at all. And only about 10% of those that do have fluorescence strong enough to affect the visual appearance of the diamond. And no matter how strong, it has nothing to do with the stability or strength of the stone. That’s right. Deep breath.

Now, what can happen, however, in stones with very strong fluorescence, is a sort of milky or hazy appearance. Now, this is most often seen only in strong natural light, aka sunshine, as opposed to indoor lighting, or when under UV light (yes, if you’re up in the club, your stone might glow). So given all those parameters, fluorescence in and of itself will not cause your diamond to look cloudy, unless it’s very strong and under certain lighting conditions.

Ok, so this should be kind of a no-brainer but we’re going to say it anyway. A poorly cut diamond will look dull, cloudy, blah. It’s not that the diamond itself is actually cloudy, it’s just that it hasn’t been fashioned well and thus doesn’t bounce light back to your eye, and well, it’s just dull. This is why cut is the most important of the 4Cs and where you should absolutely spend your budget. Because even a big rock will look boring if it’s not cut well.

Now, if you’ve already purchased your diamond and it wasn’t cloudy or dull to begin with, but it is now, then we’re dealing with a slightly different beast. Let’s get the scary things out of the way first. For instance, yes, there is a possibility that your diamond is damaged or chipped and that is causing its cloudy appearance, especially if it’s chipped on the bottom (pavilion) of the stone. If the chip is large, you may be able to feel it by running your nail lightly along the diamond’s edge (girdle) and maybe your nail catches on it. Or perhaps the stone is loose, which you can hear by holding your ring near your ear and gently tapping on the band (shank). If you hear a rattling sound, you should get that ring to a jeweler right away.

Clean Up Your Act

Now, if your diamond isn’t chipped, but you’ve been wearing it for a while, there’s nearly a 100% chance that it’s just dirty, darling. Hate to be such a bore but that’s the cold cloudy truth. Even if you think you’re being super careful and precious about your ring, you probably do normal things. Like snacking, washing your hands, or using lotions and potions and things. We all do, and it’s nothing much to worry about. These normal activities, however, after a bit of time can lead to buildup on your diamond. A bit of oil can be the perfect resting place for dust and dirt, especially on the bottom of your diamond or around its prongs, where it’s harder to simply brush off. Easy peasy, though, babes. Just clean your ring! A tiny bit of dish soap and warm water should do the trick. You can use an old, extra soft toothbrush to work out any stuck bits. Just be mindful to check for loose stones before doing so, because you don’t want to lose any through scrubbing.

All that said, consider this a gentle reminder that fine jewelry should always be insured. Check with your homeowner’s or renter’s insurance agency to see if you can add it to your policy or if they offer jewelry insurance. Or try Jeweler’s Mutual, who’ve been in the business of insuring your most precious pieces for over a century. They even offer free quotes! And please, please, please take your ring off. Like, pretty often, actually. None of this sleeping and showering and whatever else you’re doing with that diamond on. Don’t wear it gardening or to the gym. Don’t leave it by the sink where it can fall down the drain or heaven help us get eaten by a garbage disposal. Trust us on this one. Just be careful with it, and make sure to have a jeweler inspect and clean it at least once or twice a year and you’ll be golden.

All things considered, the likelihood of cloudy diamonds is pretty low. Want to see for yourself? Check out our diamond search where you can view 360-degree images of more than 10,000 diamonds and don’t forget to zoom out (because size can be deceiving), or book a virtual or offline appointment at our New York salon to view certified lab-grown and natural diamonds in person.