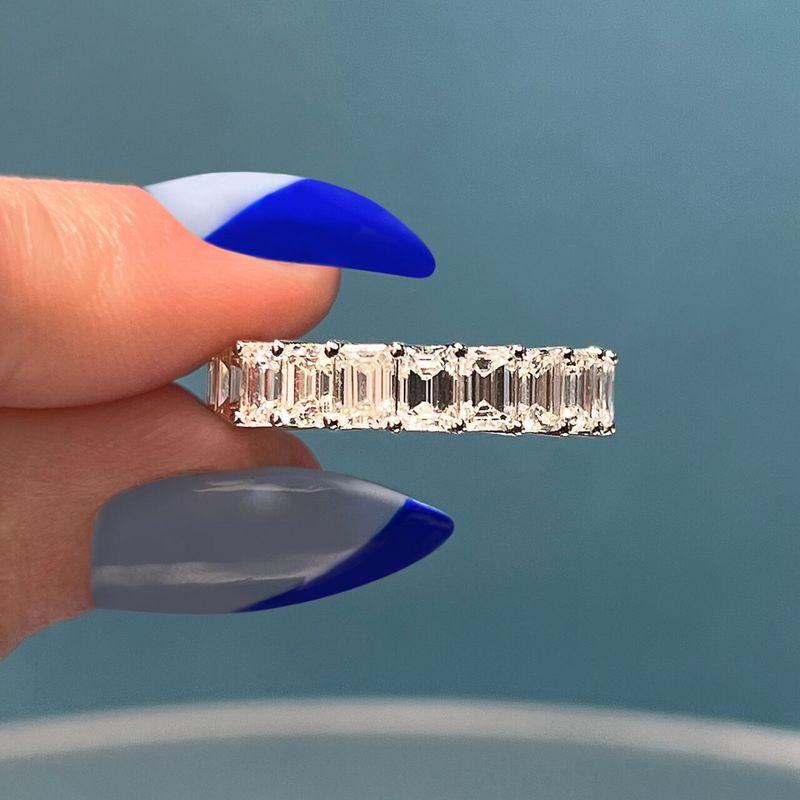 The Future of Engagement Rings

Relationships today are really something else, right? For anyone who’s swiped their way through dating apps full of newfangled acronyms and relationship anarchy, the idea of engagement rings, wrought with tradition, can seem, perhaps, a bit out of touch. It also brings up a lot of questions. Questions like who wears the engagement ring? Can dudes wear engagement rings? Can two women both wear engagement rings? What if you’re non-binary? What about your polycule? And how on earth do you choose a ring that suits you and your awesomely modern relationship? Well, we say, engagement rings for everyone! But admittedly, that hasn’t always been the case.

For those bucking traditions today, engagement rings are often seen as an outdated symbol of patriarchal ownership. And it’s not without reason. In fact, this deeply rooted symbolism dates way back to ancient Rome when women wore rings to symbolize a business contract or obedient love. Back then, rings were often made of ivory, bone, copper, or silver. But gold hit the scene around the 2nd century CE and has been popular ever since. They’ve even found gold rings in the ruins at Pompeii, but it wasn’t until the year 850 that true “betrothal rings” became known as such, with a papal decree. While those early rings were likely pretty simple, over the centuries they began to feature rough-hewn engravings, religious symbols, enamel and gemstones.

The Campaign for Diamonds

While the first occurrence of diamonds in an engagement ring (that we know about, of course) was in 1477, it didn’t look anything like today’s engagement rings. Tiffany didn’t even release their classic solitaire setting until 1886! That’s 400 years apart! And you better believe that engagement ring designs changed dramatically with the fashions over all that time. For one thing, the modern round brilliant cut diamond — today’s most popular diamond shape — wasn’t invented until 1919. You’ll see that older diamonds have fewer facets, less sparkle, and heavier metal settings instead of today’s light, airy creations. It’s around this time that men’s wedding rings started being exchanged in a dual-ring ceremony.

With modern diamond cutting techniques and new diamond mines discovered across the globe, the 20th century diamond industry suddenly had a supply problem of the overflow variety. Someone had to create demand. And it’s De Beers’ 1947 “A Diamond is Forever” advertising campaign that really brought the idea of diamond engagement rings to the masses.

When we really dig into engagement ring trends, the 20th century is where it’s at. From intricate Edwardian styles and the classically Art Deco to mid-century flair and modern bling, jewelry designs have closely followed fashion tastes over the last 150 years. And in similar, well, fashion, things always come back around. Here’s how:

While modern diamond cuts are known for their intense sparkle, there’s an undeniable allure to antique diamonds with their soft glow (they were cut to look their best in candlelight) and characteristic imperfections. And today, they’re super popular for another reason: sustainability. While there are arguments to be had about the environmental and human impact of diamond mining and lab grown diamonds, purchasing an antique diamond is, frankly, the most sustainable option for the simple fact that it requires no new resources. It’s like shopping vintage, darling, only it will truly last forever.

If you like the look of antique diamonds but want a more modern take, a rose cut diamond ought to do the trick. We love a rose cut not only for its soft rainbow flash but for its super low profile wearability. Cut shallow, with a flat back instead of a pointed pavilion, the rose cut is great for anyone that, say, wears gloves a lot or just doesn’t want a big diamond sitting high off their finger. And they’ll give you that instant vintage look without trying too hard. Make a rose cut modern with a simple, clean setting like a bezel or plunge.

There’s just something so glamorous about Art Deco-style engagement rings that they’ll never really go out of style. Think geometric details, emerald and Asscher cut diamonds with their step-cut facets that give you a hall of mirrors effect, and bright white platinum. Art Deco is a popular look for gender neutral engagement rings as well, with the rise of signet style rings and boldly patterned bands.

You can modernize this look with a wide domed band set with a sunken diamond that gives you a super wearable, low-profile engagement ring. Or instead of a bold center diamond, mix and match stones closer in size for a three- or five-stone style ring that gives you lots of finger coverage.

For those not into the white diamond look, whether it’s just too typical or you’ve got other concerns, there are plenty of alternative engagement ring stone options and these have been around forever. Sapphires, for instance, have long been a symbol of romantic love, going back to the 14th or 15th century. Colored gems were also popular in Art Nouveau and Edwardian style jewelry, before diamonds really became a thing. And while black gemstones or black diamonds may have once been associated with mourning, today they’re a modern, edgy look that offers a stellar price tag.
If you’re looking for a modern sapphire engagement ring, there’s always the famed Princess Diana (and now Kate Middleton) engagement ring, with its halo of diamonds framing a deep blue stone. But we also love sapphires for their many hues, which you can show off in a cluster engagement ring, or multi-hued band. And black diamond engagement rings are not as uncommon as you might think, either. We love them in bold geometric styles or something extra romantic for a bit of contrast.

Today, folks of every persuasion are opting for simple styles that say something personal instead of what everyone else is wearing, and these include unique bands. Just ask David Rose, right? I mean, we won’t turn down a fist full of gold any time soon. A band can be worn by anyone in place of or in addition to a traditional major stone style engagement ring. For instance, pair a solitaire with a chunky gold patterned style. Or go all in on a diamond eternity band instead!

We love mixing different metals or textures in a band stack too, anything to make it your own! Pair wide bands with slim solitaires. Add a colored gemstone accent. Or an entire row of pave diamonds! Mix metals for a two-tone stacked look. Or try a matte finish for something different.

No matter what your relationship looks like, or how you decide to commemorate it with jewelry, there’s a ring style out there for you. The best way to find it? Start with our design quiz, where you can customize to your heart’s content and even get a free sketch! From there, our design team will work with you to create your dream ring, completely from scratch.
For a bit of inspo, explore our collection of signature styles, or check out our diamond search, where you can view 360-degree images of more than 10,000 diamonds and don’t forget to zoom out (because size can be deceiving). Want a bit more help? Email our team at hello@frankdarling.com with a bit about your budget and style and we’ll get you sorted in no time.