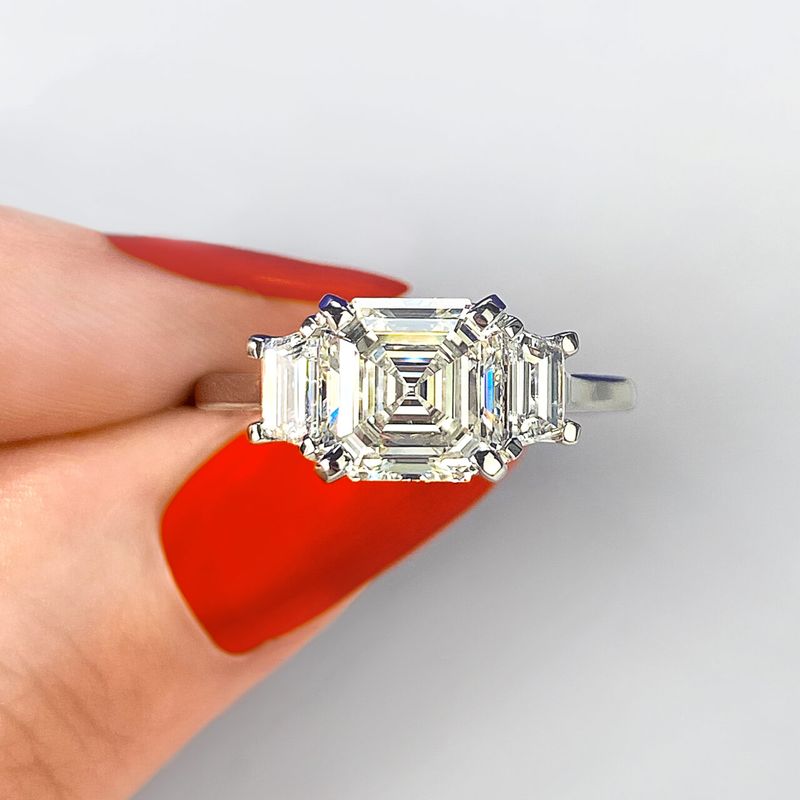 The Story Behind the Royal Asscher

Asscher cut diamonds often conjure up notions of wealth, rarity and excess. It is the only diamond shape whose name bears a capital letter. Local jewelers rarely sell Royal Asscher’s, and their popularity has wained since the earlier part of the century. This is partially due to scarcity, and partly in favor of more sparkly cuts like the ever-popular round brilliant.

They are fussy, expensive, and difficult to find. Yet, for some, no other diamond cut compares.

The Asscher family — known for designing the royal Asscher — are legendary within the world of gemologists, diamond enthusiasts, and historians.  A reputation the family earned from a century of experience cleaving exceptionally large, rare, and often royal gems.

Born into a family of diamond cutters, Joseph Asscher made a name for himself by designing the family cut, known as The Asscher Cut, in 1902. This evolved into the Royal Asscher.

The Asscher cut was immediately recognizable, and quickly gained notoriety among the rich and famous of the early 20th century. Joesph patented the design to ensure the family fortune.

In 1945, the Asscher family was deported from The Netherlands and forced into concentration camps. Their assets ( including the diamonds) were seized. A year later, ten surviving family members returned to Amsterdam. They found the local diamond industry destroyed, and their fortune stolen. Undeterred, Joseph Asscher began to rebuild their legacy.

Forty years later, their determination paid off. Queen Juliana of Holland awarded the family a royal title, and the Royal Asscher Diamond Company was born.

IN PURSUIT OF PERFECTION

The original Asscher cut — the predecessor to the Royal Asscher

Diamonds may not be as rare as their marketing suggests, but vintage Asscher cuts certainly are. Some are lost, others were recut in favor of the more popular round brilliant. Some are still locked in safety deposit boxes — heirlooms of a generation past.

In the beginning, few diamond cutters could properly cut an Asscher, and thus, very few Asschers came to exist. Original Asscher cut diamonds are one of the most sought-after diamonds in the world. They are a symbol of exclusivity. The skill and artistry of the diamond cutter are equally as crucial as the rough diamond’s internal quality. Each diamond is uniquely cut to enhance the beauty of the stone.

A hundred years after the Asscher Cut’s original invention, the cut began to dwindle in popularity. Joseph Asscher’s great-grandnephew designed the Royal Asscher Cut and refueled public desire. The result: an endless hall of mirrors made up of 74 individually step cut facets — a mesmerizing display of intricate craftsmanship, fire and light.

The crown has more facets than an emerald cut, and the pavilion sits deeper. This causes Asschers to be more expensive than emerald cuts as well as most other diamond shapes.

Imagine a diamond so rare that its discovery could generate excitement around the world. A diamond that could become the foundation of a family’s legacy. A diamond the size of a human heart, that would become the subject of dinner party conversations for generations to come. This is the Cullinan Diamond.

On January 25, 1905, in South Africa, the premier mines superintendent unearthed The Cullinan Diamond. Sir Thomas Cullinan, the mine owner, named the diamond after himself. Cullinan sold the diamond to the South African government. The government gifted it to King Edward as a birthday gift and in celebration of five years of peace.

Upon receipt of the diamond, King Edward VII asked Joseph Asscher for advice. After some back and forth they agreed to cut the stone into nine large stones that would together become the crown jewels, and 96 smaller stones that the Asscher family would keep as payment. Jospeh Asscher transported the stone from London back to Amsterdam in his pocket.

After six months of studying the diamond, Joseph had the idea to cleave The Cullininan publicly, which resulted in an embarrassing failure. His second attempt was in private, and he successfully cleaved it in two.

The nine largest diamonds that were cut form The Cullinan went on to adorn Great Britain’s imperial crown, Queen Elizabeth’s brooch, and currently reside in Queen Mary’s private collection of jewels. The largest of the diamonds is named,  ‘The Great Star of Africa.” At 530 carats, and with 74 facets, it inspired Asscher cut diamonds for a century to come.

Similar to the Cullinan diamond, The Krupp diamond is a magnificent Asscher cut diamond with a fascinating history of theft, wealth, romance, and the FBI.

As far as diamonds go, this one is huge. The 33 carat D color Krupp diamond is worth a small fortune. The original diamond belonged to Vera Krupp, a wealthy baroness. who wore it everywhere. Unbeknownst to her, someone had their eye on it.

On the evening of April 10,  on a ranch outside Las Vegas, Vera and her employees were finishing dinner when three men come knocking at her door, offering to pave her driveway. Moments later they were tied up and the ring, along with $700,000 in cash, had been stolen.

The FBI quickly identified a fugitive wanted in connection with a similar robbery in California, John William Hagenson, as the likely thief.

The FBI chased the criminals in a zig-zag fashion across the US from Vegas to Fort Worth and Miami Beach before arresting Hagenson in Louisiana. But Hagenson no longer had the diamond ring or the cash. Six weeks later the FBI received a tip that a small jeweler was selling a big diamond. Identifying James Reeves as the thief, the diamond was found sewn into the lining of his coat, and the smaller baguette diamonds in a jewelry store in St. Louis.

After Vera Krupp’s death, Richard Burton bought the diamond at the estate auction for $307,000 and gifted it to Elizabeth Taylor onboard their yacht on the River Thames. Frequently photographed, Elizabeth adored this glittering gemstone. After Elizabeth passed away, the Krupp diamond sold for 8.8 million to a South Korean business conglomerate for a record setting price. In some cases, diamonds can make a good investment, but there may be trouble along the way.