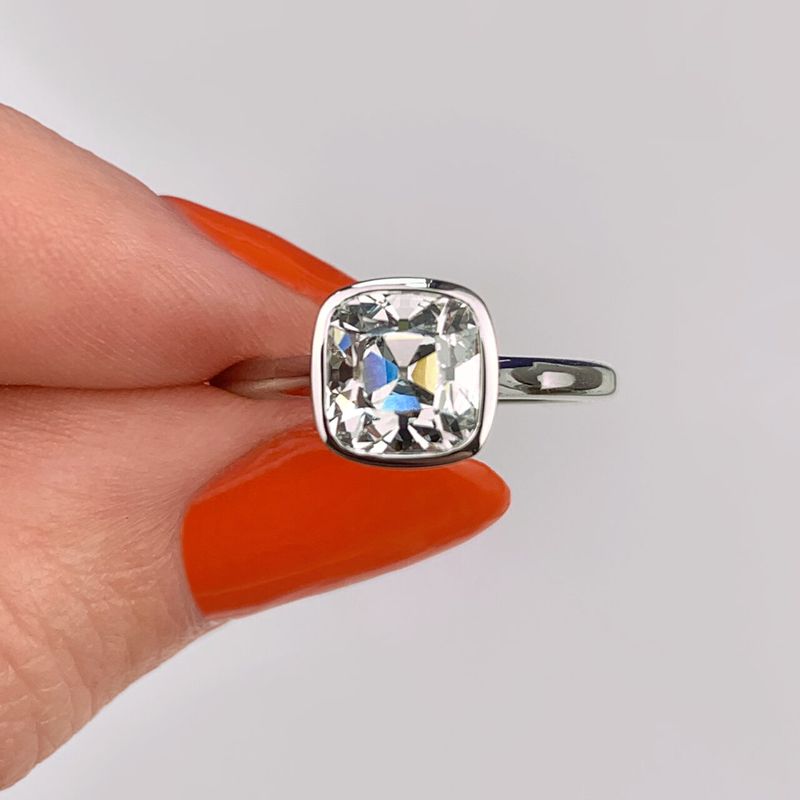 It’s a little like Batman vs Superman, you know. They’re both superheroes, so on that level, same, same. But they’re really not. One is born that way. The other goes all high tech and tricks himself out. They each have their purpose, and their diehard fans. Same with diamonds. In an industry full of confusion (some of which is, sadly, purposeful), we’re here to set the record straight with a super basic, super understandable, real-person explanation of the difference between lab created diamonds and natural, mined diamonds. Let’s dig in.

Maybe you already know the deal here, but just in case, we’ll take it way back—back into time. Back when natural diamonds were forming deep within the Earth’s crust, when some lil’ bits of carbon found themselves under a miraculous combo of hot hot heat and intense pressure. This crazy intensity caused magna to explode to the earth’s surface, forming kimberlite pipes, and carrying with it a stream of sparkly gems.

By the looks of them, is it really any surprise that for centuries, humans have been in hot pursuit of these brilliant rocks, panning, excavating, and moving literal mountains to find them? We think not. While mining companies the world over have made their fortunes stockpiling these brilliant rocks, as with all natural resources, there are definitive downsides. Enter, lab created diamonds.

Along with many other crush-worthy things, the 1950s brought us lab created, aka lab grown, diamonds when a couple of crazy scientists got the hair brained idea to grow diamonds in a lab. Seems too good to be true, right? Wrong. Lab created diamonds are chemically, optically, and physically identical to natural diamonds. Think about it like making ice. It forms by itself in nature, yet we’ve figured out a contraption (hello, freezers) that lets us reproduce the same conditions from the comfort of home. Much like diamonds. So are they real? Absolutely.

But there’s more. Without getting too technical, there are two processes used to grow diamonds in a lab. HPHT (which stands for high pressure, high temperature) is the OG of diamond creation, and uses a whopping 1.5 million pounds of pressure per square inch and heat above 2,000 degrees Celsius to press a diamond into life from a tiny seed. CVD, on the other hand (which stands for chemical vapor deposition), is the new kid on the block. In this process, a thin cliche of diamond seed (often produced by HPHT) is placed in a hot, sealed chamber which is then filled with carbon-rich gas. That gas is ionized, microwaved, lasered, or some other fancy techy technique-d to make the carbon stick to the seed and slowly but surely, build itself into a totally real diamond crystal.

Not romantically, darling. Diamond type! Maybe you’re thinking, hold up—you just told me they’re all the same. Just a bunch of silly carbon, right? Sure. But carbon’s a little more complicated than that. Because, well, nature. See, during the formation of a diamond, those little bits of carbon usually manage to hook up with some other hotties. Boron, nitrogen…you get the picture, right. And those little trace elements can influence a diamond’s color, inclusions, or even its crystal shape. And this is where the fancy gemological diamond “type” classifications come in.

The basics? There are five different types of diamonds — Type IA, IIA, IB and IIB and Type IaB. Lab created diamonds are almost always type IIa. This classification just means they’re colorless and lack impurities. But to further complicate things, some lab created diamonds (usually HPHT-grown) are type IIB, which have boron present in their molecule. Like natural diamonds, boron gas can give lab created diamonds a blue tint. This usually shows in the comment section of the certificate and says something like “blue nuance.”

In nature, type IIA diamonds are extremely rare. We’re talking less than 2% of all mined diamonds. They’re the stuff of celebrities, collectors, and auction houses, but generally, not engagement rings. Unless you’re Kim K, of course.

Ok, circling back to those downsides we mentioned—It doesn’t take a rocket scientist to figure out that diamond mining is intrinsically unsustainable. Diamonds are a finite resource, and well, it’s only a matter of time until we’re out of them. In fact, the easy-to-reach supplies are basically gone. Which means more digging, deeper digging…you get it. But both lab created diamonds and natural diamonds have an impact on the environment. Here’s the need-to-knows.

The natural diamond industry loves to critique lab grown diamonds for energy consumption (all those lasers and whatnot), but the reality is mined diamonds use a whopping 500 million joules per carat, whereas lab created diamonds use about half that. Some growers are taking this one step further by using entirely renewable forms of energy such as solar or hydropower. And while there definitely are coal-powered factories (primarily found in China and India) outputting high volumes of lab created diamonds, there are also US growers building modern, carbon-neutral giga-diamond factories that run on sustainable energy. If you’d like a diamond grown using renewable energy – just ask!

While diamond mining today looks much different than it did in the early ’90s, it’s still a dirty and dangerous profession that involves removing large quantities of dirt from the Earth, rivers or ocean beds and siphoning or sieving the diamonds from rock, soil or sand. Every carat disrupts nearly 100 square feet, and creates thousands of pounds of mineral waste. It’s difficult to imagine the environmental impact of diamond mining. From pin mines to ice mines, and deep-sea mining to small-scale cooperatives stripping riverbeds — it touches every part of the ecosystem.

Despite the growing popularity and availability of lab grown diamonds, the uber-traditional diamond industry still isn’t quite buying in. And this extends to diamond grading. While many labs will offer grading report for lab created diamonds, the GIA (basically the BMOC of grading labs) still used a lot more leniency in their reporting—i.e., ranges of color instead of specifics. And because of this, the price and value of a GIA-graded lab diamond will be affected.

Not to worry, though. IGI and GCAL are two labs who’ve stepped in to fill the gap. Both of these labs provide full grading reports for lab grown diamonds and all of Frank Darling’s lab diamonds will come with one of their certificates. And yes, they are still based on an internationally-recognized grading system and use similar state-of-the-art equipment and processes to guarantee authenticity.

If you ask any old school jeweler on the block, they’ll probably still tell you that lab created diamonds aren’t “real” and don’t have the mystique or romance of natural, mined diamond. Why? Because the diamond industry is run by a bunch of bigwigs with a vested interest in their mined diamond stockpiles.

But ultimately, choosing a diamond to represent your love story (or, heck, any ol’ day of the week) is your call and your call alone. And you should do so based on what’s important to you.

A lab grown diamond will save you a pretty penny if you’re tight on budget. In fact, these days they’re about 40-50% less than comparable mined diamonds. They’re also, if not perfectly so, at least more sustainable than mined diamonds. But if you’re still not convinced, or just love the idea of a naturally-grown diamond, then by all means, there are plenty available. One other option to throw in there for you? Antique diamonds! That’s right, it’s like thrift-store shopping but way more sparkly. You can get a natural diamond but one that didn’t require any extra energy or carbon footprint to be on your finger.

Ready to Find the One?

Check out our diamond search where you can view 360-degree images of more than 10,000 GIA and IGI certified lab grown and natural diamonds and don’t forget to zoom out (because size can be deceiving), or book a virtual or offline appointment at our New York salon to view diamonds in person.